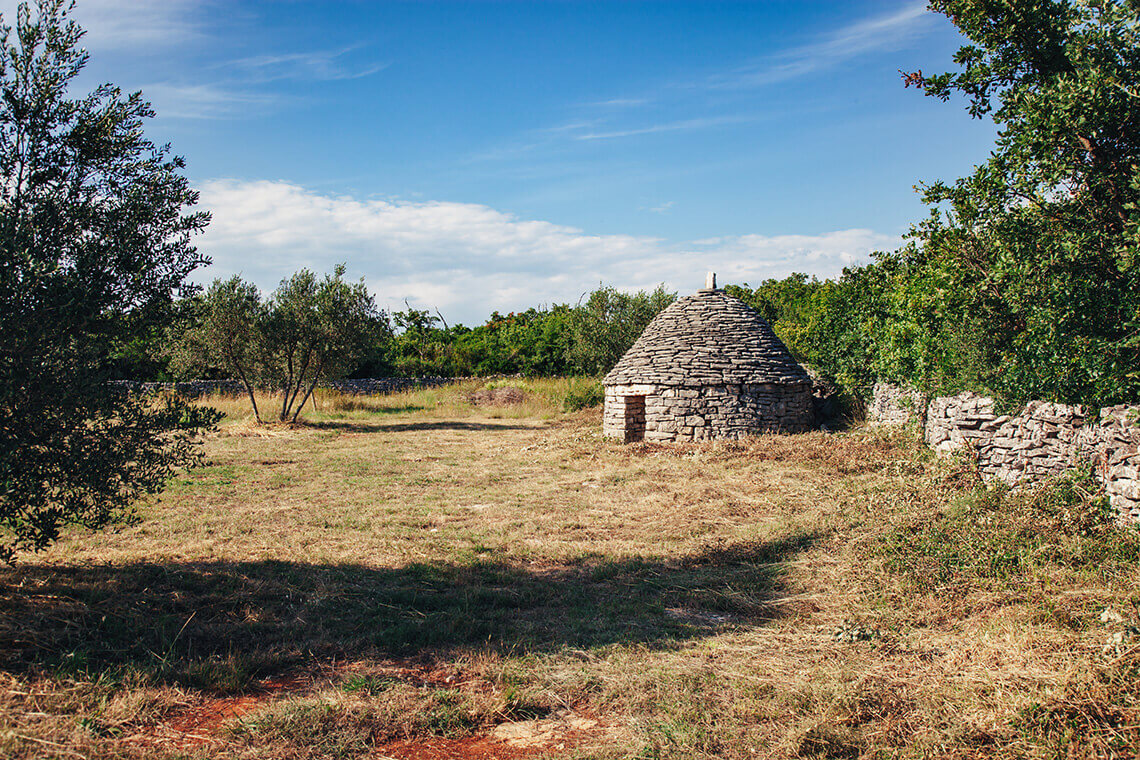 Discover what’s hidden inside the kažun, an example of the architectural heritage of Istria.

Did you know that the largest kažun in Istria has a diameter of 4.5 metres and is over 4 metres tall? Kažuni are small country houses made of dry walls, spread throughout Istria.

Travelling along the local roads in Istria, you will note the landscapes of the Istrian countryside characterised by olive groves that stretch as far as the eye can see. Here and there you’ll see buildings in dry stone wall that resemble trulli: and this isn’t far from the truth: they are Kažuni,

The Kažuni are so small that an adult person could not fit into one standing up, and it is amazing to think that three people could fit into one at the same time.

The origins of the kažun cannot be traced to a particular ethnic group, since they date back to periods before the well-known colonisations of the Istrian peninsula.

They are becoming increasingly popular in the southern and western parts of Istria and today they are the best-known symbol of the peninsula. Kažuni are little stone houses with one environment and, in most cases, a round or square layout.

They are a triumph of the primordial construction culture of the old civilisations present in the Mediterranean. The Istrian kažun is one of a kind, a primitive Mediterranean structure made of rock, fabricated in such a way as to close the house, also with vaults alone and without other construction elements or building materials. The round kažuni are characteristic of southern Istria, while the square ones are located in the central and northern parts of Istria.

The kažuni are decidedly rural structures, rising in the open countryside or on the outskirts of the populated areas. They can vary in size but are usually rather small. They are not supposed to be permanent homes, but were used in the past as temporary shelters for those who worked in the fields and forests, sometimes for farm animals (especially goats and sheep), and for storing the products of the harvest and agricultural tools. In particular, the kažun was used by farmers who wanted to stay in the field after sunset.

Go for a morning stroll along the dirt tracks of Bale-Valle, walking from one field to another and you’ll see that every piece of countryside has its own kažun.