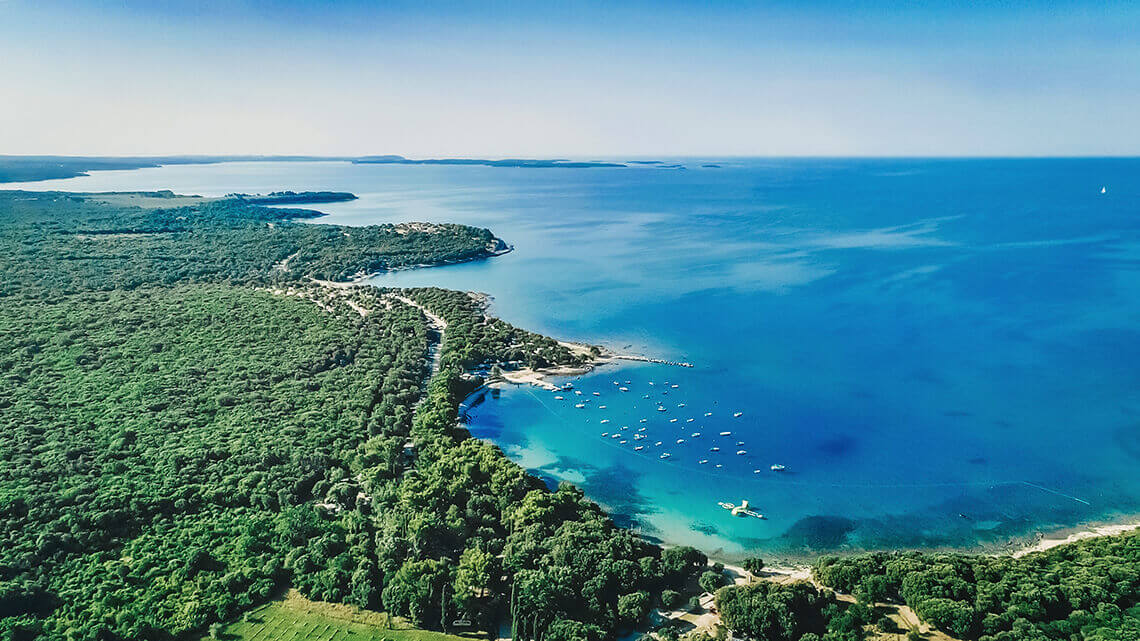 The mermaid of the Adriatic.

Halfway between the land and the sea.

hose who do not believe in love at first sight may well change their minds. Istria charms at first sight and fascinates both those who are crazy about the sea, as well as those who love the hinterland.

Islands and islets line up one after the other along the jagged coastline and all you need to do is decide on which to set foot. Each displays its wild natural environment set against the backdrop of crystal-clear waters of the Adriatic. But to think of Istria just as a sea and sun destination is to do it a disservice, as the mountainous region of Ćićarija offers unforgettable views and landscapes. The same is true for Učka, a mountain range that rises to a height of some 4,500 feet above sea level. Regardless of which part of the Peninsula you want to explore, historical architectural and religious sights dating from different periods of history will accompany you on each step of the way.

During a Mon Perin holiday, you will have the good fortune to discover Istria at its most authentic: it takes just 30 minutes by car to reach some of the most scenic and interesting places.

So let’s set off to some of these places to get an idea.

Traces of the ancient Roman world in Pula.

There are seven hills just like in Rome, the Caput Mundi or Capital of the World. Colonia Pietas Iulia Pola, the Roman name for Pula, has a history going back over a thousand years. The city was built on the coast overlooking the bay, a site where the cultural heritage harmoniously co-exists with the natural environment. With hospitality running through their veins, local people are always ready and delighted to engage with new visitors and help them discover the treasures of their area.

The elegant city of Rovinj.

Cobbled streets and Renaissance walls speak for themselves. Rovinj is one of the most beautiful discoveries during a Mon Perin holiday. Here, art and culture are the order of the day, as are breath-taking views over the blue sea dotted with twenty-two islands and islets.

The Byzantine city of Poreč.

The Emperor Justinian transformed it into a pearl worth of admiration. Under the Byzantine rule the city reached its highest splendour and the Euphrasian Basilica, declared a World Heritage Site by UNESCO, saw the light of the day.

It’s unique in its kind for the animals that populate it and the vegetation that covers it. A total of 736 hectares of land distributed among 14 islands make it one of the most beautiful archipelagos on the planet.

The Acropolis of Motovun.

The town of Motovun is an acropolis perched on the top of a 908 feet high hill where you get a genuine sense of its medieval origins (12th to 13th century). A series of 1052 steps lead you up to its top where the view that opens out to the beautiful Central Square built in Venetian style and overlooking the countryside is well worth the effort. Motovun is famed as much for its fine wines such as the Malvazija and Teran, as for truffles. Its woodland area extends for miles along the valley of the Mirna River making a fertile ground for this precious mushroom.

The peak of Hum

Hum! It sounds like an onomatopoeic word, but it’s actually the name of the Croatian town (Colmo in Italian), said to be the smallest one in the world. It has 20 inhabitants and covers an area of 100×30 meters. The town is famous for its grappa and for keeping the tradition of electing a mock mayor around a stone table alive. Cobbled streets and elegant churches of Hum make a great discovery.